Contact Jeanne for a speaking engagement or schedule a consultation.

My journey of writing opened my eyes to view my own experiences and conflicts as life lessons, allowing me to evolve as the protagonist in my own story.

Sure, I share screenwriting advice, but In my personal blog, I reflect on fear and humor in the most brutally honest way I can. I open my wounds and hand you the salt shaker. If I can’t look at my own wounds honestly, how can I evolve my fictional characters?

I hope my lessons in life and writing move you in some way. 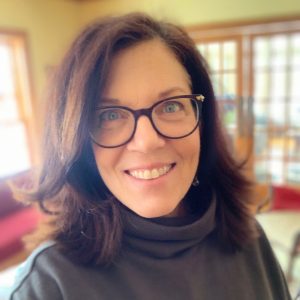 A midlife crisis led Jeanne from a 15-year ownership of a motel and restaurant to finally becoming the writer she always dreamed of being.

Jeanne is an Executive at Pipeline Media Group, and Editor-in-Chief of Pipeline Artists, a site created to inspire and empower artists, launching in March, 2021.

Former Editor-in-Chief at Script magazine, Jeanne still has a regular column on the site entitled Balls of Steel, which was selected as recommended reading by Universal Writers Program. Jeanne was also a Senior Editor at Writer’s Digest, launching the Take Two column in Writer’s Digest magazine. When she isn’t sharing her writing war stories in her columns, she speaks at conferences and universities around the country.

A graduate of Cornell University, she’s written several spec scripts, including an Expo Screenplay Competition Finalist script — the adaption of the 2009 Pulitzer Prize-winning book, Slavery by Another Name, with its author, Douglas A. Blackmon, senior national correspondent of The Wall Street Journal, which also was selected as one of the Top 25 in Tracking Board’s Feature Launch Pad Competition. The 10-hour limited series version of the same project is a PAGE Awards TV Pilot Drama Finalist as well as semi-finalist in Sundance Episodic Labs, and quarterfinalist in both Slamdance and Script Pipeline. The book — an exposé of how slavery didn’t end with the Civil War but was resurrected by businessmen and plantation owners by finding a loophole in the 13th amendment and preserved for seven decades after the Emancipation Proclamation — has already dramatically revised conventional American history. It was a New York Times Best Seller, and has been reprinted more than a dozen times. A documentary based on the book appeared on PBS in 2012. This 10-hour limited series is a dark piece of our country’s history that needs to be told. It’s impossible to read this story and not have a better understanding of the racial divide, even today.

Jeanne launched her freelance career with an article in Writer’s Digest Magazine on her own wild Twitter Pimp Angel ride, Confessions of a Tweetaholic.  Twitter is her wheelhouse and where she co-founded ScriptChat, a screenwriting chat, where screenwriters come together to learn… with no ego.  She’s a co-founder, blog mistress, and pimp of the weekly Twitter screenwriting chat, #scriptchat.

Beyond writing, Jeanne lectures at conferences and events on effective social media use for authors as well as the importance of facing fears, inspiring people to pursue their dreams. Jeanne is available for individual consultations as a “Screenwriter Therapist” to help writers understand what’s blocking them from achieving success as well as consulting with novelists to understand the complexities of Hollywood and adaptations.

Self-described “writer of things,” Jeanne writes anything from blog posts, articles, novels, short stories, screenplays and beyond. Visit the Published Clips tab above for more of her work, and the Interviews/Appearances tab for her podcast and radio spots. If it’s something that can move you, she’ll find a way to write it.