Independent filmmakers are my heroes. They are out-of-the-box thinkers  who make their dreams happen, not needing anyone in Hollywood to sprinkle fairy dust on their projects. As a serious artist, you cannot wait for the traditional industry to validate you if you want to get your films scene by the world.

Come join me at Flyway Film Festival in Pepin, Wisconsin next weekend and celebrate indie films and screenwriters! 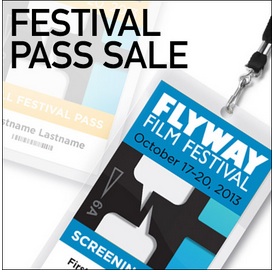 BREAKING IN OUTSIDE OF HOLLYWOOD

When screenwriters ask an industry insider for advice, the most common response is, “Move to L.A.” But these panelists say, “Not so fast.” Coming from three different parts of the country, they’ll share their personal successes and failures as they’ve broken into the “system,” one way or another. This session covers creative strategies to use, no matter how far you are from the Hollywood hills. Topics include:

– How to build a strong community of support
– Planning your trips to L.A. to maximize your success
– The do’s and don’ts of pitchfests
– What you need before you pitch to a producer or an agent
– What to do after a networking trip
– How to keep your name in sight even when you’re miles away
– Newbie mistakes to avoid
– Understanding when to say “no” to a note

Beginning and experienced screenwriters alike will benefit from this insider/outsider panel.

Workshop: SCREENWRITERS, BRING OUT YOUR SCENES!

You’ve written a dramatic and/or hilarious scene, but you can’t be sure it actually works until you hear the words spoken aloud. In this workshop, screenwriters can bring in a scene from their screenplay for a chance to have a group of local actors read it. A discussion and critique will follow. There’s no better way to refine your work than by airing it in public!

Screenwriting professionals Jeanne Veillette Bowerman and Mike Ott will guide the process. Bring a printed copy for each of characters in your 5-10 minute scene (no more than five pages). Actors will read as many writers’ work as time permits.

Non-writers are also encouraged to come and contribute to the discussion.