Today, on the side of a highway, I saved a woman’s life.  Some people 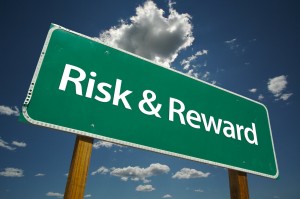 have called me a “hero”, but I don’t think I am. All I did was follow my gut.

Do you trust your gut enough to take a risk?

As I pulled onto the busy entrance ramp, I noticed a car off the road on the highway above me. An elderly woman hunched over a guardrail as her daughter-in-law stood behind her, holding her up with one hand and attempting to flag help with the other.

I immediately pulled over and ran up the steep hill full of thorny bushes. When I got to them, the younger woman was screaming for help, struggling to simultaneously hold her mother-in-law, flag cars down and call 911. The elderly woman’s airflow was completely blocked.

Without a thought, I raced behind her, wrapped my arms around her torso and yanked hard.

Once, twice, three times. Nothing.

I could hear the woman on the phone with the medics, relaying the scene, begging for help.

In a split second, I decided it was either give this all I had or watch this woman suffocate. I had to commit. I had to take the risk of breaking her ribs or having her sue me.

The choice was made: She wasn’t dying on my watch.

I gave a large, firm squeeze, this time lifting her right off her feet. A piece of bagel flew out her mouth, and the delightful sound of coughing and gasping for air came.

The daughter-in-law burst into tears, profusely thanking me. I wrapped my arms around her, rubbed her back, and told her everything was going to be okay.

She reached her hand out to me, “I’m Danielle.”

The elderly woman wiped her eyes, “I’m Marion… thank you. Thank you so much.”

Danielle was worried still, but Marion insisted she was fine and just wanted to go home and was half in the car before we could stop her.

I don’t really remember what happened next, except I think they got in their car and drove off, as I crawled over the guardrail and gingerly slid down the hill, thorns tugging at my jeans.

As quickly as our lives merged, they were separated.

All they know about me is my name is Jeanne. That’s it. No phone numbers exchanged, no emails, just our first names.

I drove down the road, hands shaking. Everything was surreal. As I walked through the market moments later, I noticed people around me. What had their morning been like? Who loves them? Who would miss them if they were gone?

Three women shared a few brief moments on the cusp of life and death. All before 9AM on a Saturday morning.

Part of me says it was fate that I was there. Had we not hosted Tracy, an Irish student teacher, I wouldn’t have been at the airport this morning or on that highway. Maybe my choice weeks ago to bring Tracy into our home started the path of fate to help Marion so she could be in her own home with her family tonight, alive and well.

But I don’t think it was just fate. It had far more to do with the willingness to take a risk.  A risk none of those other drivers would take.

I feel sorry for them. By staying safe on their path, they missed an opportunity of a lifetime. One I will never forget. They missed giving the gift of life.

There’s much to lose when you don’t take a risk – with your life, with your career, with your heart.

Get off the safe path. Take a risk. I dare you.

13 thoughts on “Risk Your Fate”